How to go Canyoning in Dalat

One of the best ways to experience the waterfalls of Dalat is to get into them! So let’s join a canyoning tour and dive into the thrill of Datanla Waterfall from within! This guide shares how to go canyoning in Dalat.

During a recent trip to Dalat, I got to tick off one of my last remaining bucketlist things: Canyoning. The countryside around Dalat is dotted with many beautiful waterfalls to explore, but there is no experience that can top actually getting into the waterfall yourself. So we booked a canyoning tour and spent the day abseiling, ziplining and swimming through the various levels of the popular Datanla Waterfall in Dalat. Here’s what we got up to on our day of canyoning with Dalat Highland Adventures.

➡️ Planning a trip to Dalat

➡️ Getting to Dalat
➡️ Where to stay in Dalat

➡️ How to go canyoning in Dalat

Disclaimer: This tour was not sponsored by Dalat Highland Adventures, we just has a great time and I wanted to share the experience.

Planning a Trip to Dalat

Nestled among the mountains of the central highlands of Vietnam, Dalat is a popular destination to escape the heat of southern Vietnam and get out into nature. The countryside is full of adventures to be had, from waterfalls to hikes to scenic drives. Here are the basics for planning a trip to Dalat.

How to get to Dalat

The bus is the cheapest and easiest way to travel to Dalat. The nearest destinations to travel from are Saigon, Nha Trang and Mui Ne. I’ve found the easiest way to book transport in advance is through Baolau* or Vexere, search engines that compare all travel options to find the best one for you.

From Mui Ne or Nha Trang

If travelling from further afield, then flying is recommended. The nearest airport is Lien Khuong Airport which is located approximately 30km outside the city.

Where to stay in Dalat

The city doesn’t have a backpacker area like you’ll find in Saigon or Hanoi, but it does have an abundance of cute accommodation options from hotels to homestays to hostels. Tigon Hostel is perfect for backpackers with an amazing view of the valley (they’re not on booking.com but you can book via Facebook). For a cute homestay try Dalat Memories Homestay* or  Chang’s Village* (personally haven’t stayed here but it embodies the cosy cabin vibe of Dalat).

How to go Canyoning in Dalat

While there are a lot of waterfalls in Dalat, the only way to experience canyoning in them is via a registered tour company. There are a handful of companies that are licensed to take tours, so I recommend doing some research to ensure the group you go with follows all the safety measures.

We chose to embark on our canyoning experience with Dalat Highland Adventure Travel and I’m so glad we chose them!

Highland Adventure Travel are one of the leading tour providers in Dalat, and one of the only companies licensed to take you canyoning at Datanla waterfall. They take safety seriously and provide training and all the equipment you need to explore Datanla waterfall from within. The tour takes most of the day and includes pick up and drop off at our accommodation, 7 waterfall challenges as well as lunch midway through.

Our day with Dalat Highland Adventures started early with a pick up from our hotel, before heading straight to their base at Datanla waterfall on the outskirts of the city. Datanla is one of the most popular waterfalls to visit in Dalat, with an alpine coaster and walkways you can explore on your own. The canyoning tour gives you an entirely different experience from what most visitors at Datanla waterfall get, filled with the adrenaline rush of abseiling, ziplining, sliding down natural waterfalls and floating down the lazy river.

We got suited and booted, literally in wetsuits and hiking boots, ready to take on the falls. After getting set up with our harnesses we had a quick safety talk before practising our abseiling skills on the fake cliffs at the Highland Adventure Tours base.

The first of 7 challenges you conquer on the Highland Adventures Canyoning Tour in Dalat is an 18m abseil down the first portion of Datanla Waterfall.

We were all a bit nervous about embarking on our first abseil, but nerves were quickly overridden with adrenaline. It was so exhilarating to make it down the first plunge of Datanla fall with encouragement from our group and instructor! The drop into the icy pool at the bottom woke us all up and got the blood pumping for what was to come.

After beating the current and climbing out of the waterfall, we trekked down a short trail to a new section of Datanla waterfall, beyond where the regular visitors get to explore.

Here we prepared for the next challenge; ziplining. The guides expertly set up the zipline and got us ready to cruise from the top of the waterfall all the way to the embankment on the other side of the river.

After the zipline, we floated down the lazy river, not without lots of laughter from bumping into each other, and arrived at our next challenge: a natural waterslide.

From the outside, the waterslide looks like a piece of cake. A gently sloping rock leads into a somewhat enclosed rockpool.

What you don’t see is the current that sweeps you at speed down the slide and thrusts you into the whirling water of the pool below. Each of us was positively thrown off the end of the waterslide and into the depths of the pool. It was fun!

Our arrival at the largest waterfall drop of the day commenced with a lunch feast. Fresh fruit, build your own banh mi’s and snacks to fuel us up for the biggest challenge of the day; a 25m abseil.

Now, I’ve got to admit: Standing atop a 25m drop, which involves a slippery waterfall and spray to the face wasn’t so appealing to me. I had bashed my knee earlier in the day climbing out of the water and it was aching. Between the pain in my knee and the daunting task of a 25m abseil, I decided it best to sit this one out, and instead watched from the trail and cheered on the members of our group as they nailed the abseil.

As we hiked along the trails to the final portion of the waterfall, we passed our 6th challenge; cliff jumping. With a variety of levels to choose from, we launched ourselves off the cliff and into the icy pool of water below.

A few failed flips and somersaults later our group was sufficiently freezing and beaten up by the cold water, so we continued our trek towards the end.

As we moved on to the finale of the canyoning tour, we were apprehensive. Nicknamed “The Washing Machine”, the final waterfall abseil fills your mind with images of being plunged into swirling water. And well, that’s exactly what happens.

Starting at the top of an overhang, you actually can’t see the waterfall from the launch site. A quick abseil over the edge finds you hanging inside the weight of the waterfall, from where you continue abseiling until you hit the river below, being swirled through a quick whirlpool, only to reemerge in the midst of the calm lazy river. The perfect combination of challenge and thrill after a fun day in the water.

The Lowdown on Canyoning in Dalat

Our day of abseiling and swimming through Datanla waterfalls was such a great experience on our trip to Dalat; perfect for the adrenaline junkies but also those wanting to experience the waterfalls in a way that many visitors don’t get to.

Here are the details for you to experience it too:

Honestly, canyoning in Dalat was one of the best things I’ve done in Vietnam! I highly recommend this unique experience with Dalat Highland Adventures.

Planning a Trip to Dalat?

For more information on planning a trip to Dalat, and other destinations in Vietnam, be sure to check out my Ultimate Vietnam Travel Guide which includes everything you need to know for travelling around the country. 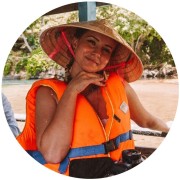